This recipe was created out from a childhood taste memory and that too from a late night craving.This was one of my favorite local food takeaways for dinner during my childhood days at Jeddah. Actually the more common is a savoury meat version which all others in my family opted for while I chose these sweet banana filled ones(as always I have a sweet tooth).
I have been searching for its recipe for years now and as I haven’t found any food outlets that sell these here in this city, I had no option but to try to create a recipe of my own and that too from my ‘taste bud memory'(does that word exist!).And as I remember these had a flaky and crispy outer covering that resembled the malabar parotta, the dough was easier to recreate and the filling was an experiment.Egg and bananas was that what I assumed it to be from my taste memory(oh! not again).Alas to my surprise and boundless joy it tasted the same as it had those days.
But some time later I came across some videos on you tube where they were making something which had the same filling, a Malaysian street food called Roti Pisang.I am not sure if its the same or not but the fillings seems same and I could not find the recipe for the dough from any where.
Too much of the descriptions now and here goes the recipe..
I don’t have any idea what the original recipe is but I assure you this has the same taste(if my ‘taste bud memory’ hasn’t tricked me). 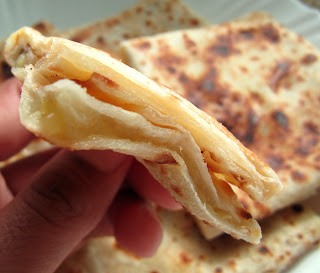 Vegetable oil- for greasing and frying.

Take a large bowl,beat egg with milk and ghee.
To this add flour, sugar and salt.Knead well to get a soft and elastic dough.The more you knead the better.Cover and let it rest for an hour or more. 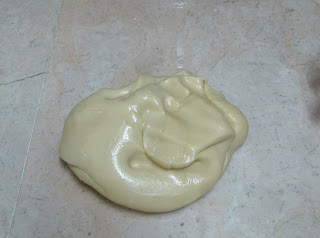 For the filling, beat the egg with 1 tbsp of sugar in a bowl and keep aside.In another bowl lightly mash the banana with a fork.
Divide the dough into lemon sized balls.You will get about 24 balls. 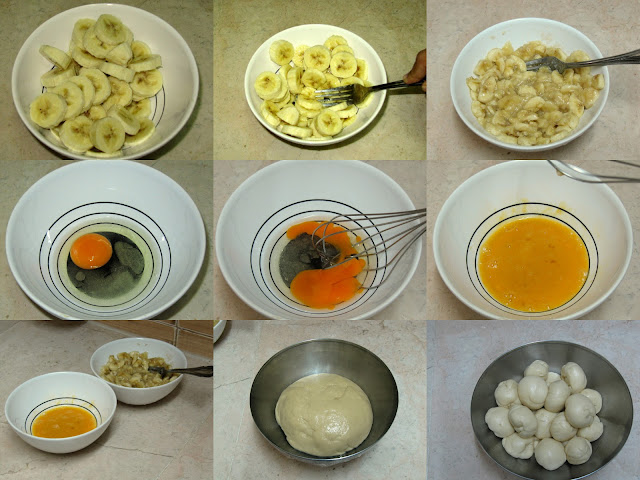 Take one ball and on a very well greased counter top,flatten it into disc using your oiled palm. 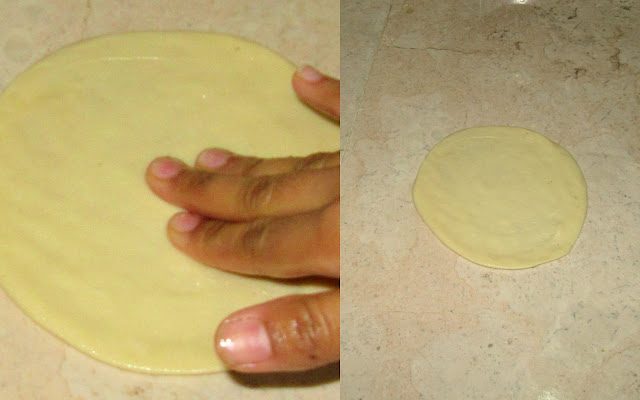 Now using a rolling pin, roll it as much as you can or until you get a very thin almost transparent sheet.Alternate method is one which you see the professional parotta chefs do, “flipping in the air” method which requires lot of practice.

Now brush the beaten egg and then spread the mashed banana in the middle portion then fold each sides into the center one by one.

Transfer it very carefully onto a heated greased frying pan.
Cook on low to medium heat pressing it to the pan so that the dough and fillings inside gets cooked well.Flip it over and cook until golden spots appear. 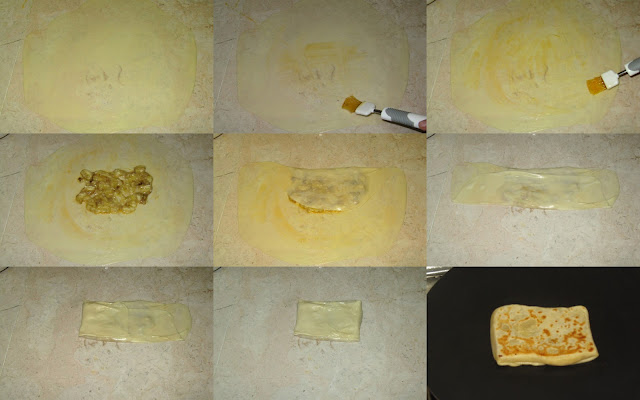 To get a crispier and flakier crust you can do all the steps of filling and folding after getting the thin sheet transferred to the skillet like as shown in the picture below.Using a spoon sprinkle on oil in between for a more flakier crust.The transferring of such a thin sheet is a bit trickier though. 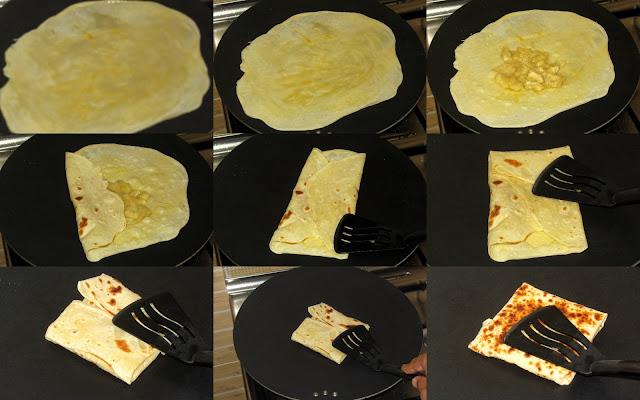 Cut it each into four smaller squares and serve warm…. 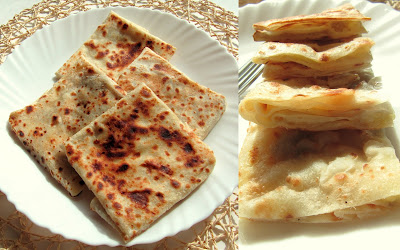 Notes:
You can use sliced bananas as such without mashing them.
I sometimes take only half of the dough for making these and with the rest I make parottas for dinner.
You can halve the recipe for the dough if you want to, by keeping the no.of egg the same and adjusting the flour for the dough.
You can also use any oil like canola oil instead of ghee for the dough.
I am sorry for the pictures in the collage has got some of its right ends cropped but hope you get an idea of the method still… 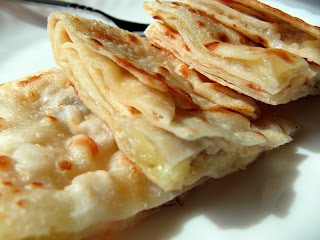