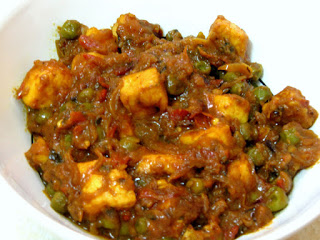 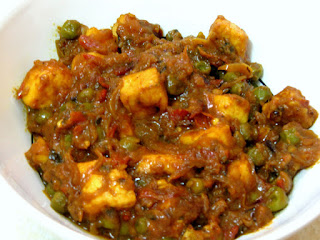 It was the first time I tried making paneer at home and that too with low fat milk.Here we get fresh paneer at the deli counters in super markets which I used to purchase though the frozen packets(of course isn’t fresh better than frozen) are available.But the gravies made with those had a weird, hard to describe taste which kept me off from those.Its been a while since then I had did something with paneer.And it was recently from a friend’s home I got to taste a paneer dish ( I suppose Butter paneer) .The paneer was so soft and fresh different from the ones I had.But she used the frozen ones.So it was then I thought of trying to make it myself.And I did it.It was not that difficult at all.Not that messy as I thought it would be.And guess what it tasted the same way as the restaurant ones so soft that melted off…..And this is what I prepared out of my first trial batch of home-made paneer.

Take a non stick pan and heat the oil.
Fry the paneer for a few secs until it gets slight brownish on its edges.Then remove it with a slotted spoon and keep aside.
In the same oil, splutter cardamom,cinnamon and the cloves.
Then add in the sliced onion.Fry until golden brown.
Now add the ginger-garlic paste.Once the raw smell disappears add  the chopped tomato and greenchillies.
Once its mushy add in the spices one by one along with the required salt.
When oil starts separating add in the yoghurt.
Once it simmering and oil appears on top add half a cup of water.
Then throw in the green peas when it starts boiling.
Cover and cook for a few mins until the peas are cooked.
Now add the paneer and let it simmer for a few mins for the paneer to absorb the spices.
In between add kasoori methi.
And finally the spicy masala gray is ready to be served with rotis or chapathis…. 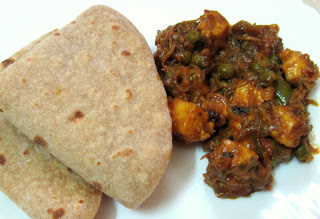 Notes:
I used frozen fresh green peas.If using the dried ones soak it in water for an hour.
Fresh cream can be added at the final step which I actually forgot but did not feel as if I had missed something at all.